Here’s everything I knitted and crocheted in 2015, complete with links to patterns. As I haven’t updated for a while there are several new finished objects towards the end of the post, including Wee Lima and some baby hats, as well as an ‘ugh’ and what I’m working on now!

This is my recent ‘ugh’, which was based on Chanelette but with a waffle stitch pattern instead. I gave up on it because it came out completely the wrong proportions. I’m kind of heartbroken about all the time I put into it. It was meant to be for my niece:

As my niece’s favourite colours are pink and yellow, my replacement project for her that I’m now working on is a rose cardigan in this lovely buttercup yellow cotton:

The other special project I’m working on is also coming along nicely. Just one more month to go!

It’s been a while so I’ve got lots to show you! A finished object, projects on the go, a knitting book and a new cardi for me!

I’ve finished this sweet little blue cardigan for my newborn-to-be and I’m delighted with it. The pattern is Ode to Pinstriping and it is free on Ravelry.

I’ve got a few other projects on the go at the moment as well. A crochet blanket and a little knit sweater (wee lima) also for the baby:

What else? Oh I got a knitted doggies book for a friend which has these gems in it. It’s Knitted Dogs and Puppies by Sue Stratford and includes these bizarre delights:

I also treated myself to a maternity cardigan off eBay which I scandalously did not knit myself but has beautiful lace edging. It’s this one.

I’m knitting again! This is exciting for lots of reasons (obviously knitting is ALWAYS exciting) but it’s especially exciting for me because:

1. I knitted and crocheted too much last year and gave myself RSI so I had to stop knitting for what has felt like FOREVER. For the first time today I was able to knit more than one row without pain. Hooray! My knitting ban may be over, I just need to take it easy and built up gradually so it doesn’t happen again.

2. I’m a big fan of knitting for little ones. Knitting for newborns especially is always exciting and a lot of love goes into every stitch formed on the needles. For the first time now I get to knit for my own future newborn, who is due in February next year. Here’s a glimpse of the little cardi I’m working on:

I’ve got some sort of repetitive strain injury which they thought was tendonitis but after two weeks of unsuccessful treatment for that decided it is a nerve problem. So I’m on medication to treat it and FULL REST – no knitting, no crochet, until it’s better. It’s hell!

It’s been about 8 weeks of this. What if I’ve forgotten how to knit?

So I’ve been doing fun stuff like trying to wind this nice yarn into a ball and getting completely tangled up for hours. (There was a lot of swearing involved):

And I’ve made some things in pottery class and I sewed a dress for my niece:

So that’s why I’ve been a little quiet on the knitting front lately. Hopefully in a couple of weeks I’ll be able to start knitting a little again! I’m supposed to start with 15 mins at a time so it’ll take me about a year to make a newborn cardigan 😥 slow updates in the future!

Frog or Finish ’15* is complete! I’ve either finished or ripped the majority of my current projects. There is one remaining that fits in neither category, as it should be. I’ll come back to that later.

This scarf, which I made with two strands of DK held together and cast on 31 stitches which was PLENTY. I used 4.5mm needles. As I’ve mentioned, it’s for my mum.

And these socks (‘A Nice Ribbed Sock’), which I’ve been knitting since LAST JULY. The curse of second sock syndrome.

They look even better on Nath’s feet, which is who they were made for:

I was getting fed up of knitting the rest of it and I’d only got to the armpits. It had to go.

A moment of silence for Poolside please

This sky scarf using this scarf pattern. A sky scarf was a lovely idea when I began this project in January 2013, but it has lost it’s charm somewhere between the tiny rows of lace using 4 ply yarn, the tangly balls and the endless pages of sky colours waiting to be crossed off.

So long, sky scarf. It was good while it lasted.

As with most supposed dichotomies, there are things that fit into neither camp. This sock yarn blanket is a project that I’m not planning on finishing any time soon, but I’m happy to have it ticking over between other projects, using leftover yarns and giving me time to ponder the next project I want to tackle. It was a project passed on to me from the talented cartoonist Cassian who makes Poly in Pictures.

*I got this idea from here, and I’ve no idea where it originates. Anyone?

You know that feeling you get when you talk to other people that love what you love? It makes you love it more, it boosts and inspires you, you get advice and get to share some tips of your own?

Today was one of those days and I feel super lucky that I have people like that in my own family. Me and my mum and my sister were dorking out about knitting and my mum’s yarn delivery unexpectedly arrived, so we crowded round oohing and aahing while she opened it. #nerds

It was lovely 100% cotton to make summer tops for her granddaughter (my niece), I can’t wait to see the results.

Here’s me and my sis clicking away on the needles:

My sister is working on a sweet spring/summer dress for the little one. This photo doesn’t do it justice, it’s a lovely shade of green.

Why yes, this scarf IS coming along nicely, thanks for noticing! It’s just the last little bit that seems to be dragging. I knit another 5 inches and then decide it needs at least another 5 inches.

My mum tried it on today and the colour suits her beautifully. Hopefully that’s given me the motivation I need to finish it pronto so she gets it before this cold snap is over.

Speaking of cold snap, I had a fun time today with the boiler packing up right at the start of one of the coldest weekends in the last year. Thankfully someone came out quickly and got it going again! So relieved! I thought for a moment I was going to have to burrow into my yarn stash for warmth. Who knows when I would have been seen again…

Now the festive period is out of the way I can show you some things I made people as gifts.

I knitted this hat and mittens set for my niece, who is two and a half. They’re too big for her but she tried them on straight away, hopefully she still likes them next winter when they might actually fit her!

I also made a baby blanket and bootees set for a friend who had a gorgeous baby girl in 2014:

Last year in total I made two baby blankets, one pair of bootees, two pairs of mittens, one hat, one cardigan and a crochet ninja, and I started on a blanket, a jumper, a pair of socks and a scarf!

Well, congratulations. If you’re reading this you survived the festive period, and who knows – in few months it might even start getting warmer and you can say you survived winter too! So that’s good.

Here’s my cute new felt covered diary and a sneak peek at a scarf I’m currently working on. It’s an awesomely textured no purl rib pattern and I’m knitting it holding two strands of DK yarn together for extra squidge factor.

I cast on just 31 stitches which I’ve found to be plenty wide enough and I’m using 4.5mm circs. Circs forever! It’ll be for my mum if I don’t curl up in it and hibernate before it makes it out of my clutches.

Christmas was a success because I got new yarn. As I live in England and it’s New Year’s Day (I stayed up wayyy past my bedtime) I wasn’t awake for enough daylight to take good pictures of it. Luckily for you I have a horribly bright fluorescent kitchen light which is very unflattering but great for taking knitting photos after dusk.

That King Cole Glitz is utterly fabulous and is likely to become a sparkly beret. That Cascade yarn is Peruvian wool from my sister, she knows the way to my heart ❤

Thanks to a small army of friends and family I am now moved into my flat.

Also, the bathroom has a shower and is sans cooker!

Everything else is a total mess and filled with boxes of course.

It’s been a stressful week so I’m spending a couple of days with my parents; playing snooker with my dad

And knitting with my mum

Mum kept losing her row counter because she’s using a circular needle so I suggested she thread it onto some yarn around her neck. Success! And she looks very stylish, though she politely declined a photo for the blog.

She making a lilac snood for herself

Just kidding Nath! He had a special birthday this week. 😀

Have you started Christmas knitting yet? Whenever anyone mentions the C word I put my fingers in my ears and sing and it’ll stay that way until I’ve finished these damn socks 😛

Today I’m working on some lovely socks for my partner. I love this colour yarn and I’m really excited to get them done as I think they’ll really suit Nath.

One and a half handknitted socks

I haven’t been knitting as much lately because I’m in the process of moving out of my current house into a flat on my own. I’m going to try to make more time for knitting in the coming weeks because actually it’s time well spent to unwind and focus on something else, recharge my batteries for the next list of things I need to do.

When I’m feeling stressed out, I talk to my friends and they tell me how awesome my new flat is going to be. I worry about living alone, and they say “but think of your flat, it’s going to be full of yarn!”. It’s funny that so many people have said this to me independently of one another. It’s true that knitting and yarn are a comfort to me, though my stash is big enough, and I’ve got visions of people popping round to see the new place and balls of wool tumbling out the front door when I open it. One step closer to my dream of being Scarf Lady when I grow older!

The new place is a bit of a state at the moment and I have just a week until I move in. It’s unlikely I’ll have a kitchen floor before I’m actually living there! Here are some pics of the chaos:

Kitchen with no floor

Save time in the morning, cook breakfast from the bath!

It’s going to take a lot of yarn to get me through this :’D 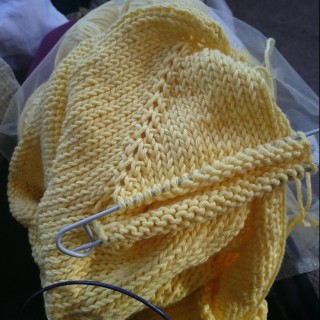 UK based knitter and crafter in love with their yarn stash forever. Tracey works in a charity bookshop and can often be found with their nose in a novel (or a knitting book!).

I Love You But I've Chosen Knitting
Blog at WordPress.com.
Loading Comments...